The price will be sent soon via email.

What Is Anaerobic Fermentation of Domestic Waste?

Anaerobic fermentation is one of the effective ways to realize recycling of domestic waste. Anaerobic fermentation of domestic waste refers to the decomposition of organic matter by microorganisms under anaerobic conditions, in which C, H, O are converted into biogas - methane and carbon dioxide, while trace elements such as N, P, K are stored in the residue and be converted into matters easily absorbed and utilized by passive plants.

After the mixed garbage is weighed and measured, it enters the sorting system. After the bag is broken, it is evenly sent to the trommel screen by the feeder for screening, and the small particle garbage with suitable particle size is screened and then sent to the anaerobic fermentation process. The waste materials with size above 80mm continue to be sorted and recycled before being crushed, and then the crushed waste is sent to the anaerobic fermentation room.

Mechanical sorting is mainly composed of two parts: magnetic separation and mechanical crushing. After this process, the ferrous metals in the garbage are sorted and recovered, and the material on the screen is crushed and processed to reduce the particle size, which is conducive to improving the subsequent sorting effect of hydraulic separation process.

The material under the sieve is first subjected to magnetic separator to separate ferrous metals, and then passes through the deep water rolling separation washing equipment. Depending on the specific gravity of the substance, heavier substances such as muck, batteries, and stones sink into the lower part of the device, while lighter substances such as paper and plastic float on the upper part. The sinking objects and floating objects are respectively sent to the recycling system for recycling and disposal. Finally, material in the middle level is sent to the precipitation treatment tank, and the precipitated material is sent to the anaerobic fermentation process. 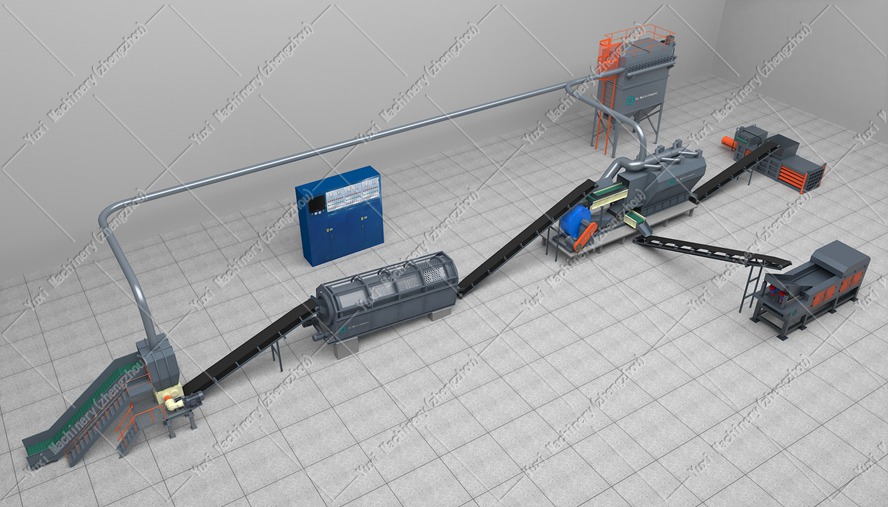 The required equipment in this process includes a mixing tank  for diluting and mixing thick muddy garbage, and an anaerobic fermentation tank. The garbage is mixed in the mixing tank to make the dry matter content between 20% and 35%. The heating is provided by steam jet, and the mixture is injected by a piston pump. The bottom of the reactor stays for 2 weeks, and the organic matter is degraded under the action of microorganisms to form decomposed organic matter with stable performance that is easily absorbed by crops, and at the same time produces a large amount of biogas. In order to homogenize the fermentation material, a pneumatic mixing device can be used, and the biogas is sprayed into the tank from the bottom of the fermentation tank through a spray pipe under pressure. The biogas used for mixing and stirring can be recycled.

After the feed liquid is discharged from the fermenter, the solid-liquid separation is performed by mechanical extrusion to obtain solid finished products and liquid sludge. In order to separate the suspended solids, the sludge needs to be further processed. The treated clear liquid can be used for the dilution of garbage, and the remaining part can be used as a nutrient for fruits and vegetables.

The temperature of the biogas from the anaerobic fermentation tank is relatively high, about 40°C, the humidity is up to 90%, and contains a small amount of corrosive hydrogen sulfide, so the gas should pass through the cooling separation system, desulfurization device, and pressurized storage, and then fed into the gas turbine/internal combustion engine generator set. The generated electricity not only can be used in its own equipment, a part of the generated electricity can be input into the local grid. The generated heat energy can be supplied to the fermentation chamber for heating and constant temperature, and the rest can be supplied to the greenhouse and vegetable greenhouse for constant temperature.

Due to the product of anaerobic digestion also contains a certain amount of biodegradable substances and microorganisms such as bacteria, it is harmful to the human body and the environment and cannot be directly sold or discharged, aerobic composting can be used to degrade organic matter and kill bacteria.

The remaining material after anaerobic digestion enters the aerobic composting reactor, and the material is matured and dried under low pressure conditions. This process takes place in closed structures that are stacked for at least 2 weeks before being taken out and ventilated. The compost is refined to remove inert substances and then used as a soil conditioner or mixed with chemical raw materials such as nitrogen, phosphorus, and potassium fertilizers for granulation. After drying, cooling, screening and other processes, the organic compound fertilizer is produced.

The CO generated from anaerobic digestion and composting can be collected and purified to be used as aerosol fertilizer for greenhouse vegetables, reducing carbon emissions.

If you want to know more about domestic waste sorting separating line, please leave us a message, we will contact you as soon as we receive the message, thank you!

Get a Free Quote Now!

The price will be sent soon via email.